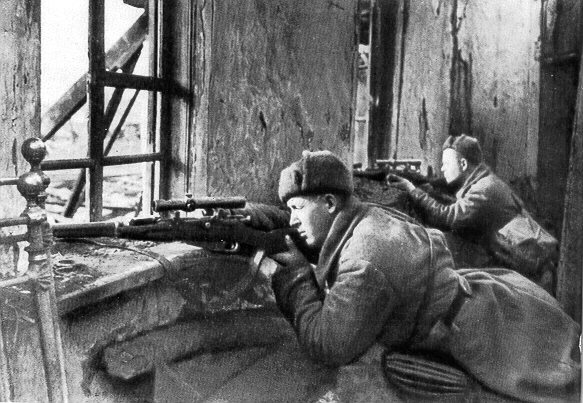 The model 1891-1830 (91/30) Sniper is based on the standard rifle from 1891 to 1830 from the former Soviet Union. These rifles were used for a large part of the 20th century. In order to make the version of this sniper rifles, were of high quality models of the 1891-1830 of the production line drawn. They were specifically considered whether they meet the high quality requirements for a Sniper Rifle. By far the most common 91/30 PU sniper rifles were manufactured in Izsevsk, and they are easily recognizable to the arsenal hammer and sickle in a wreath on top of the room, and a number with at least seven digits and Cyrillic characters stamped in the left-hand side of the chamber.

The PU scope is simple, robust and effective. With a magnification of 3.5-power and 169mm (6.7 inches) long, and a weight of 270 g (9.5 ounce), the PU is a simple design with a three-pole European reticule, and it was to be manufactured more quickly.

The Sniper 1891/30 proved to be an exceptional sniper rifle, maybe even the best of World War II. The rifles were mass produced, with as many as 330 000 of the sniper variants produced between 1941 and 1943. The guns were long and heavy so they were a bit awkward to use in the field. However, despite the fact that these guns are very accurate. Average accuracy was about 1.5 MOA with some examples of well below 1 MOA. This level of accuracy is amazing for a rifle produced during wartime circumstances and in these figures. It is believed that would have many German snipers used in World War II made the 91/30 sniper model, over their own Mauser K98 Sniper.

We expect in the end of 2015, to have some of these Mosin Nagant 91/30 Snipers in our stock. For more information; mail to info@classicmilitaryarsenal.com

For more information, ask for our Luger P08 pistols